The 10 People You Meet In Paradise

Jared Savitski, owner of Paradise Transit, tells us about some of his usual suspects 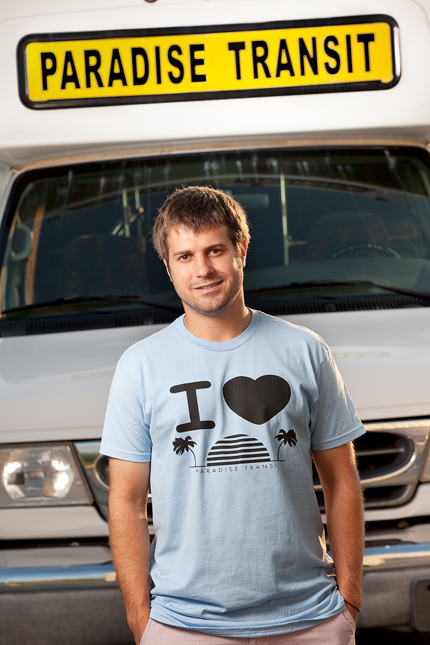 PARADISE Transit is quickly becoming West Chester’s favorite mode of transport. Because they can offer you a ride around downtown, or fill in as designated driver, there’s usually a variety of people onboard the Paradise bus. Among them you’re certain to find at least a few of the following stereotypes. Jared Savitski, owner of Paradise Transit, describes some of his usual suspects.

Betty Bachelorette: She’ll be wearing a tiara or a sash or something equally embarrassing. Her gaggle of friends will be squealing about a checklist. Want to be the last guy a girl kisses before she marries? Sit next to Betty – her friends might ask you to help them check off #11.

Philly Frank: Depending on the season, he’ll either be decked out in red or chanting E-A-G-L-E-S! (or maybe both). He’ll have had a few and be happily en route to Pattison Avenue to have a few more at the Paradise tailgate, making predictions about points and spreads. If you’re wearing Cowboys/Giants/Steelers/anything-other-than-Philly gear, try to avoid direct eye contact.

Stevie Sandals: He’s been ridiculed for years, but that doesn’t change the fact that Stephen’s year-round attire consists of nothing but shorts and sandals. Winter’s chill won’t break his steely desire to brave the elements in the most minimal of footwear, but he’ll be sitting in the warmth at the back squeezing his toes to ward off frostbite.

Sally Stilettos: You know what they say: pain is beauty. It’s not in her nature to ride a bus, but it’s even less likely she’s going to stumble home in six-inch heels – after all, they’re Manolo Blahniks! You’ll find her at the front of the bus pecking at her bedazzled iPhone, taking breaks from texting to rub her feet.

Happy Hour Harry: After a few too many dirty martinis, Harry’s decided he’d rather face his wife’s wrath for leaving the Benz in town than face a breathalyzer. He’ll be sitting out of Sally’s line of sight, but she’ll be directly in his.

Out-of-Town Olivia: She’s likely wearing office attire, since this was supposed to just be a business trip, but you can only watch so many reruns of Seinfeld from your hotel bed before the inner socialite bursts through and demands an evening out. She’ll be awkwardly adjusting her jacket on her way back to the Holiday Inn.

Singing Sam: No matter the song, he/she knows all the words… or at least he/she thinks he/she does. Who needs a karaoke mic when you have a captive audience on the Paradise bus? Don’t shush Sam; you’ll only encourage him/her. After the chorus of “Don’t Stop Believing” he/she won’t have a voice left anyway.

Timmy 21: Early in the night, Timmy will be joining in on the festivities with his older friends (and those with excellent fake IDs), but after last call on his 21st birthday, Timmy will probably be staring at the floor, holding his breath and desperately trying to contain the prairie fire, three wise men and José Cuervo shots he’s been force-fed.

Sleepy Sandy: Philly Frank, Singing Sam and all of Timmy’s friends could be howling up a storm, but it doesn’t matter – Sally is passed out with her head tucked in the corner. Maybe she’s had a long day at work, maybe she’s had one too many at the bar, but you’ll never know, because that girl is out cold.

Felipe Freshman: He’s possibly an exchange student, and definitely just starting his first year. If that wasn’t enough to confuse the poor guy, he has stumbled onto a bus full of crazy people. The music’s playing, people are dancing, somebody’s passed out in the corner, and he has no idea where it’s headed, but none of that matters – Felipe is loving it.

For more information about Paradise Transit – like where you can catch a ride – check out their website.

The 10 People You Meet In Paradise