Bartender of the Month – September 2019

How long have you been working at Ram’s Head? Seven years. It’s been a really long time.

That’s impressive. How did that come about? I grew up in West Chester, and went to high school right down the road — I actually started here back in high school. I attended college in North Carolina at Eastern Carolina University and started working in the food industry down there, too. There’s a statistic that some really high percentage of students who start at ECU don’t end up graduating from there, and I’m one of them. Moving into Sophomore year, I thought it was best to take a gap year and come home. That’s when I started working at Ram’s Head again as a host. My parents eventually convinced me to stay in-state for school, and it made sense with me having a job already here, so I decided to finish my degree at West Chester.

What are you going to school for? I’m a marketing major, and I’m graduating this December.

What’s your plan from there? I think it would be nice to go into the restaurant industry. I’ve been working in this field for a while now, and I think it could be a good idea to stick with it.

So, you started as a host, and worked your way up? Yes. After hosting, I was a server, shift manager, and then bartender. You really have to put in the time.

Was it worth the wait? I definitely like bartending the best out of all the positions I’ve had so far.

Why do you think that is? I like the fast pace, running around, the bar crawls and everything. It’s a lot of fun. Not to mention the atmosphere is different; you’re able to meet new people and have conversations.

What’s your favorite night to work? I like Friday’s. We just started having live music downstairs. A lot of local solo artists perform and smaller bands. It gets pretty busy, which makes it a lot of fun.

Do you think there’s a difference between working upstairs and downstairs? There seems to be two different atmospheres. The upstairs tends to be the older crowd that enjoys the craft beer and whisky. Whereas downstairs, there’s more of the younger scene. We are hoping to bring the two together more, which is why we started the new live music nights downstairs.

One final question: what’s your food and drink of choice? For a drink, I would say our Peach Basil Mule. We just got a whole new mule drink menu, and they are great to enjoy on a hot summer day. For food, it’s tough. Maybe the Don’t Judge Me Burger? It’s kind of intimidating; it’s six inches high. It has smoked paprika aioli, BBQ pork, onion rings, fried egg, avocado and cheddar cheese on a burger patty. If you’re really hungry, it’s to die for. Wait, no. My favorite is the nachos — they’re bomb. 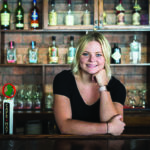 Bartender of the Month – September 2019