Bartender of the Month – November 2019

For Larry Soscia, working at Pietro’s Prime is a family affair both in feeling and in fact.

How long have you been in industry? About 20 years. I started in high school at Lima Estates retirement home. After college at Pitt, I bartended at Kildare’s in KOP, where I met my wife who was also bartending. Now we’ve got two kids, Kate and Wyatt, who go to Fern Hill, and two dogs.

Lima, Pittsburgh, West Chester… how’d you end up working in King of Prussia? I was changing day jobs, and I knew Kildare’s was opening a restaurant and looking for help. It seemed like a good fit, and I’ve been bartending part time ever since.

What’s your day job? I am an insurance agent and a mortgage lender.
Two kids, two dogs, and two jobs. How do you balance it all? I like to stay busy. Busy is a good state for me. I think I’m blessed with the ability to do it all. All three of those jobs — if you wanna call them jobs; I don’t think of being a dad as a job — I enjoy all three of the things that occupy my time. Whether it’s being a dad, being at Pietros or helping people with the finance side… it’s a good time. So, that, and coffee.

How about this: would you rather give up coffee forever, or alcohol? Ooh, man, as a bartender this is probably the wrong answer, but for me, I’d give up alcohol. I need the coffee; coffee is essential.

How would you describe your job? I run around behind the bar telling dad jokes, and I’m the only one who finds them funny.

Alright, putting you on the spot. Gimme a good dad joke. My daughter actually said this one: Did you hear about the giant who threw up? It’s all over town.

When did you start at Pietro’s? When they opened. There are a handful of us here who are on year 13. My wife came up and interviewed, then I came up. We were back the next night working on the drink menu and meeting people who, it turned out, would be our friends for the next decade. It’s a family run business, and there’s a different feeling because of that. Marisa and Sean have made it a great place to work.

Would you say it’s that family feel that’s kept you around? I don’t think if I ever left here I’d go anywhere else. I’m 40 years old and still bartending by some weird twist of fate. I love doing it, and this is a great place to do it. Our clientele, when you’re at a place this long, they become friends. People I know from Pietro’s are also the parents of my kids’ friends who I see at school — it’s a close-knit community and we like that. Plus, my wife also works at the bar, my sister-in-law works in the kitchen, and my nephew is a food runner.

Sounds like a good atmosphere. The pub, or public house, was originally an extension of the home shared by everybody. We embrace that atmosphere. We get people coming out to celebrate, but it’s also just kind of part of their routine. We’re trying to provide a place that’s comfortable to go, where you see familiar faces. We’ve got people who come in during the day, or come in at the end of your day, or come out for live music at night. I’m a busy guy, but I still get live music four nights a week — there’s something to be said for that. 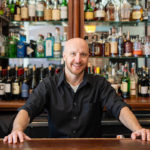 Bartender of the Month – November 2019