A couple of years ago, my children and I attended a performance of The Nutcracker by The Brandywine Ballet, which was held in the Emilie K. Asplundh Concert Hall at West Chester University. As we explored the campus while waiting for the show to start, we came upon the imposing sculpture of Frederick Douglass in the DeBaptiste Plaza on the Academic Quad. The monument stands in front of Philips Hall, which houses the president’s office, and it is framed by the curved archway of the building.

It is an arresting figure indeed: the bronze statue, including the mount upon which it stands, measures 10 feet in height, and portrays a younger Frederick Douglass, in mid-stride, his expression and demeanor both thoughtful and purposeful. His left hand rests on a staff (given to him by Abraham Lincoln, according to the statue’s sculptor, Richard Blake), and in his right hand he holds a broken rope, representing the snapped bonds of slavery, the remnants of which are seen draped around his upper torso. The statue is framed by five benches, arranged in a semi-circle, providing a spot not just for “Meet me at the Douglass statue” purposes, but one that also invites gathering, working, or simply resting and reflecting.

“Who is this?” my kids demanded. “It’s Frederick Douglass; he was an abolitionist who fought for the end of slavery,” I told them. “But why is this statue here?” they asked. “That I don’t know,” I admitted. 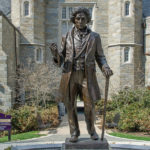