West Chester’s own Cassius King picks up a bit of celebrity support, spreading his street art across the internet.

You saw it here first, folks: last year on page 43 of the July 2019 Young & Influential issue, to be exact. That’s when we published a short profile of West Chester’s own guerilla street artist, Cassius King, whose thought-provoking and often hilarious ninja art installations – in the form of stickers, street paintings, and images screened against buildings – have captured this town’s imagination over the past couple of years.

And today, courtesy of iconic soul singer Al Green (side note: Is there a smoother voice? No. There is not.) and followed up by a boost from Snoop Dogg, he’s just put West Chester on the (viral) national map.

King’s recent post of a second superimposing of a photo of The Reverend Green over the “W” at a local Walgreens (the first of which is one of this writer’s all-time favorites) caught the eye of the Al Green, who tweeted the photo yesterday to his nearly 38,000 followers with the caption “Who did this?” Later yesterday, the photo appeared in the Instagram feed of Snoop Dogg, who has 50 million-plus followers, and by last night, an article about the mystery creator from West Chester, PA appeared in The New York Daily News.

The response has been remarkable, and King is doing his best to take it all in stride. “The past few days have been surreal to say the least,” he said. “I woke up Wednesday thinking it was going to be a typical day, but it was the farthest thing from it — starting with seeing that Snoop DOgg had shared my Al Green piece. Since then, the outpouring of interest in and support of my work has been beyond heartwarming —especially sin Al Green himself saw it. I’m ecstatic.”

And that, dear readers, is how a local artist’s post goes viral. We’re confident, though, that this WC visionary’s exceptional talent and imagination will stretch beyond “15 minutes of fame” territory. 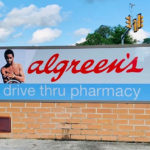