In the last issue of this magazine, I waxed romantic about the stunning sunset view that illuminated my meal in the dining room of Sedona Taphouse. At the time, I couldn’t imagine any better vista of downtown West Chester. Yet here I am, four floors up in the 44 West building, at 44 West Gay St, gazing out across the rooftops of Church Street all the way to the edges of West Bradford Township in the distant skyline.

Maximizing this expansive vista was a goal of the 44 West project from the beginning. “The design is all about being totally transparent,” explains Neil Liebman of Bernardon, the architecture firm responsible for the design of the exterior building and landscape, as well as the interior lobby and common areas.

We wanted windows as large as possible, to capture all of the borough from the outside into the inside.”

With the lobbies, the concept was also to bring the outside in. “The building has more of an industrial feel,” he describes, “with all the brick and the tall windows, like a factory. We took that concept to the interior design, using reclaimed wood and exposed structures as the inspiration.”

Anyone motivated to go on a casual tour of 44 West should be forewarned—there’s no waltzing into this place to explore. Just inside the main entrance a coded security pad controls access beyond the foyer. And it is not just physical barriers that prevent access; most of the tenants of 44 West declined to speak with us at all. Thankfully, one company welcomed us with the enthusiasm and hospitality befitting their top-floor status in the coolest building in town.

At 10:00 on a sunny winter morning, Ted White’s office is bathed in natural light pouring in from the vast bank of windows flanking the north and west corners of the room. White is President and CEO of Verrica Pharmaceuticals, a publicly traded medical pharmaceutical company that develops treatments for dermatological diseases. Verrica was previously headquartered in the 10 North High Street building. When he first heard about the 44 West project, White called his friend Eli Kahn, the developer. “I said, ‘we want in on that,’” White recalls. “And I told him we want the top floor, of course.”

In the dermatology field, image is everything. “You walk into any dermatologist’s office these days, and it doesn’t look like a medical facility,” White says. He describes instead the experience of an upscale boutique filled with illuminated shelves that showcase all manner of products to support the quest for beauty.

Verrica worked with commercial space planners to craft a space that addressed their needs and reflected their identity. The company’s colors—blue and purple—are echoed throughout the space. Subtle wisps of purple grace the marbled gray flooring.

Chris Hayes, Verrica’s General Counsel, had previously worked with local fabricator Andrew MacLaren, and they looked to him for much of the interior design, including the furniture, walls, lighting, and blinds.

“Andrew told us to go check out the remnant yard for a piece of granite,” White relates, and indeed—they found an exquisite beige specimen marbled with turquoise and purple that now serves as the tabletop in the executive conference room.

Long benches in the conference rooms serve as both storage and seating. In one such room is centered a table whose vast dimensions inspire the mind to puzzle out how it made its way through the doors and hallway to its destination. “I dare you to find a seam,” White challenges (I can’t). He flips a switch under the table and the “V” in the Verrica logo lights up.

Security is built into the design of 44 West, and it extends into the choices made for individual tenants. In Verrica’s case, the medical pharmaceutical business is subject to strict regulations that needed to be accommodated in the design of the new office. “It’s a big deal,” he explains. “Our old office on 10 North High Street had a full-time security guard. We need certain requirements, such as sprinklers in the filing room where records are kept, security of records, and per-level security of elevators.”

The building has more of an industrial feel… with allthe brick and the tall windows, like a factory. We took that concept to the interior design, using reclaimed wood and exposed structures as the inspiration.”

Location is key to image, and that applies to the types of businesses that also occupy the building. “We didn’t want any medical professionals in the building, because then we would have patients stopping by to shop for products or looking for services.” (44 West is also leased by marketing and investment businesses.)

Over the course of his 30-year career, White has had opportunities to work and live anywhere in the world, but he’s never wanted to move anywhere else. A resident of West Chester, he believes it is essential for him to locate the business in the community. “It’s a one-stop shop for going out,” he says, calling out Market Street Grill, Benny’s, and Carlino’s as frequent lunch destinations, as well as Pietro’s Prime and Mercato for corporate dinners. The location supports the local economy, too. “It helps local businesses because we’re patronizing them,” he says. “People are getting haircuts. They’re getting their nails done here.”

44 West is about more than just what goes on inside its walls, though. Ted White is looking forward to making a platform in the plaza courtyard for viewing West Chester’s renowned parades. Additionally, Eli Kahn mentions Sedona Taphouse and the soon-to-open LaScala’s Fire for “adding a tremendous vibe to the streetscape.”

There is a deeper meaning for this outdoor space. In the January 2019 issue of The WC Press, Kahn described how the project would be a tribute to his late business partner, Jack Loew, who died in 2014.
Today, Kahn points to the feature that most reminds him of his friend. “I think Jack would have gotten great joy watching little kids be fascinated with the fountain that bears his name,” he says. “The building, and especially the plaza, turned out exactly how we thought it would. The plaza is an amazing amenity to downtown West Chester, and I get great joy seeing people using it and enjoying the fountain. Jack is somewhere up there, smiling.”

Neil Liebman concurs. “44 West went through five or more different designs,” he relates. “There was a five-story office at one point. There was a mixed-used building with condos.” And the plaza almost didn’t happen. “This was a unique project that had a lot to do with commemorating Jack,” Kahn explains.“We made a decision not to construct the additional 80,000 square feet of space we were permitted to build. I doubt very much another developer would make such a sacrifice, given real estate values in West Chester. I’m happy we changed course.”

Liebman shares his own emotional moment when strolling past the building with his wife. As they posed for a photo, he was reminded of how Jack Loew, also his mentor, had helped him start his own business more than 30 years ago.

“44 West is a transformation of the borough. If you read through borough ordinances, they require you to build to the edge of the property,” Liebman says. “We created this pocket park and exterior space so that all the people who visit West Chester could take advantage of a space that didn’t exist before that building was built.” 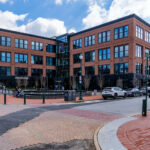