Checking out the Spence Building Renovations with Scott Zukin

Stepping through the threshold of 29 East Gay Street, also known as the Spence Building, the visitor detects smells of fresh lumber, drywall dust, and forward momentum in the air. A man on aluminum stilts smooths a trowel across the upper reaches of a wall in the first- floor stairwell. The whirring of saw blades and popping of nail guns reverberate from the upper levels of the building. Soon, the drop cloths and construction materials will disappear, replaced by gastronomes lingering over their meals and libations at the as-yet undecided restaurant that will occupy this space.

Scott Zukin gestures toward the long left wall, using his hands to frame the outline of an imaginary bar that might run the length of it. Zukin, of Zukin Realty, is the developer behind the ambitious project. “I’ve been in the business long enough to know what types of features appeal to them,” he says of prospective restaurateurs. He envisions a room in the back for hosting private parties, or even the kitchen, or a downstairs area suitable for a kitchen as well. Currently in talks with several prospective tenants, he is being careful about making the selection, because he doesn’t want this eatery to compete with any of his other tenants, and he wants to diversify the downtown’s ever-expanding culinary scene.

The restaurant will continue the Spence building’s long legacy. Its original owner, James Spence, was an accomplished entrepreneur and restaurateur who descended from a family of enslaved people. Both he and his establishment, which he took over from his grandparents, were extremely popular in West Chester; the eatery was renowned for the quality of the food and known as a popular gathering spot. James Spence was the first African American in Chester County to own a liquor license.

While the restaurant portion of the project is certainly exciting, it’s just one component of the renovation that will invigorate this historic building, built circa 1890, into a centerpiece of the downtown West Chester experience. Eleven unique one- and two-bedroom apartments will combine modern design with the building’s rich history.

Zukin had originally imagined replacing the exterior’s crumbling stucco façade with white brick, similar to the exterior of the Side Bar building across the street. When they began peeling the stucco away, however, they discovered the original sandstone façade underneath and shifted gears to repair and restore as much of it as possible. The texture of the sandstone complements the curving shape of the doorway and the first-floor window wells.

Old buildings tend to be quirky. One of this structure’s quirks can be seen when looking at the front of the building from Gay Street, where it’s impossible not to notice that the left side and right side have two different floor heights. Unfortunately, the façade on the left side was too far deteriorated to salvage, so Zukin plans to use wood for that portion.

Some features, like the staircase and its stout wood handrails, are all original. Other features seem original, but are actually new, like the small balconies that protrude from the apartments overlooking Gay Street. They are perfectly sized for a pair of modest chairs and a book, or an afternoon of people watching. Their design and wrought iron railing echoes that of the second-floor balcony that once spanned the width of the building.

“Historic buildings are exempt from certain modern environmental design standards,” Zukin says, “but we still implement them because it’s the right thing to do.” In one of the apartments, the studs weren’t thick enough to permit using the most energy efficient insulation, so they supplemented the traditional insulation with spray insulation to improve that energy efficiency.

With its classification as a historic building, there are no elevators, nor are there amenities such as a swimming pool or fitness center in the building. “It’s city living,” says Zukin, “so it’s not for everybody.” That said, he doesn’t envision any particular “type” of tenant living here. So far, he has had as many inquiries from people in their 50s as he has from young professionals.

The largest apartment of them all is on the top floor. It also has the highest ceiling. Zukin says they initially investigated the possibility of making that apartment bi-level, but there wasn’t enough room. Instead, they blew out the old ceiling and followed the roofline, giving the space an expansive, modern feel. Combined with the fourth-floor view of Gay Street, this is truly the penthouse space.

One of the features that Zukin could not change was the building’s slate-shingle mansard roof (a style of four-sided roof, with each side having two separate pitches). And so, he capitalized on the requirement by creating two rooftop terraces nestled next to the roof and dormers. These areas are accessible to everyone in the building. One side looks out toward the Chestnut Street parking garage, and eventually, toward the hotel that Zukin is building next door, while the other side overlooks the western skyscape. These top-floor terraces meld the old with the new and offer residents evenings watching the sun set or mornings of watching it rise, participants in a present-day reimagination and renovation—one of many to grace this ever-evolving town. 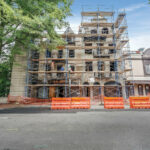