America is home to some big-name music festivals that have been around for decades. Coachella’s brought music to California for 23 years. Lollapalooza, another household name for music fans, debuted in 1991, and while for many of us that feels like yesterday, it was depressingly longer ago than that. Those are both impressive runs, but they fall short of our very own Turks Head Music Festival, now in its 39th year.

If you’ve somehow missed out on this event every year for the last four decades, it’s an awesome mix of festival and fair that brings seven regional bands to our beautiful Everhart Park. And there’s one particular feature that sets it apart from other music festivals: it’s free.

“The fact that it’s a free event makes it stand out,” says Keith Kurowski, Director of Parks & Recreation for the borough and the man who’s been responsible for this show for 18 years now. “You can bring your own cooler, fill it with drinks and food, and have an entire day in the park, with awesome live music, and not spend a penny.”

Now, that’s not to say there aren’t ways to spend your money if you’re so inclined. Beyond the music there are more than 40 crafters and vendors filling the grounds, along with food trucks, inflatables and all kinds of extra fun for the whole family. So, if your kid wants to hop around the bouncy house, or you wanna sample some funnel cake, you’re going to need to shell out a few shillings.

If you’re thinking that a free festival can’t be good, prepare for a pleasant surprise. Turks Head is a draw for fans and musicians alike. Each year the festival’s review committee has to filter through press kits and samples sent in from musicians all throughout the region — and sometimes from across the States — who all want a part in the party.

This year’s lineup runs the gamut, showcasing all kinds of musical styles. Up first is onyx&honey, local legend Rob Perna’s duo with Nikki DiGiorgio. “Rob’s been playing music around here for like 20 years,” says Keith, “You’ll probably know him from The New Kings of Rhythm.” onyx&honey shares some similarities with New Kings’ funky feel, but they also bring in the diversity of some more poppy sounds.

Up next will be Skylar Love, a new name on the music scene, and — based on the buzz — we should expect big things. “She’s an up-and-coming songwriter who’s been playing festivals all over, from Ohio and Michigan down to Florida,” says Keith. While her vocals have an undeniable hint of Billie Eilish, the instrumentals shed Billie’s electro-grunge vibe for a much more indie rock feel.

And that’s just the first two acts! The show will go on for another five hours, featuring performances from Slim and the Perkolators, Side Hustle, Station Hill Bluegrass, Ndichu and Perpetual Motion.

Knowing the talent on display, it shouldn’t be any surprise that Turks Head pulls in folks from all over the region. “I grew up 40 miles away, but I know people from back home who come here for every show,” says Keith, ”and I talk to people every year who are coming from New York, from Delaware, just to enjoy this event.”

Arguably the most dedicated fan of Turks Head is Chris Wilson. “Every year for damn near 40 years Chris has shown up with 15-20 volunteers. He builds the stage, manages the performances, and we absolutely couldn’t do this without him,” says Keith. “I don’t know if he was at the first festival, but he’s been to just about all the rest.”

Even Chris isn’t sure exactly when he started. “I’ve been coming since.. I don’t know… might’ve been the second year?” he says. “I worked with the Tom Larsen Blues Band, and we were out on the road, and Tom said we had to do this gig in West Chester. And I’ll be honest with you: I’m from here, and I hadn’t heard of Turks Head.”

Back then, name recognition wasn’t the only thing this grassroots festival was lacking. “My first year, we showed up after a night when we hadn’t slept at all for… whatever reasons, and we drove up from Baltimore in that state to find it had rained all night and was still coming down a little… and there wasn’t a proper stage, no sort of roof,” says Chris. “So, we took a bunch of 2×4’s that the local hardware store let us grab from their scrap pile — not a straight board in the bunch — and we duct taped some of those colorful gym class parachutes on top of them to make a roof for the stage.”

The festival has grown in a lot of ways since then — not least of which is that it now sports a properly covered stage — but one thing that hasn’t changed is the diversity of the musical acts. “It’s always been really eclectic,” Chris says. “Back in the day it was just bands from West Chester, or like Chester County, but obviously it’s gotten bigger than that. It’s always a great time, and with all the different genres, it keeps you entertained all day, no matter what you’re into.”

Keith agrees. “We bring in some really great musicians, and there’s nothing like this in any surrounding areas. I mean, where else can you go see seven solid acts, bring your family along, and not pay a penny?”

It’s evident in talking to Keith that the event is all about family. He’s adamant that there’s something for everyone. The same can be said for Chris. “To tell you God’s honest truth, what keeps me coming back is my son, Blake,” says Chris. “I got him involved from an early age, and after his mother and I split, this became an especially important thing that we could do together every year. He’s 27 now and getting ready to move to Washington state, so this might be our last Turks Head together. I’m sure it’ll be an extra great one.”

We’re sure it will be, too. 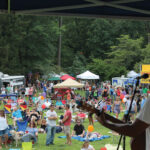