Sometimes your Saturday just calls for a little day drinking in the outdoors. Here’s where to start:

In the blink of an eye, summer is upon us. When we think of this special time of the year we look forward to vacations, sports activities, fireworks, food, and the great outdoors. School’s out, the pools are open, and the heat is on. But for those looking to add some spice to their outdoor grilling or social gathering, summer is the best time for beer. Ever since the 1980’s, beer culture and breweries have spread across America as we now account for nearly 7000 independently owned breweries. And it’s not slowing down.

The expansion has become a major drawing factor in our socializing culture. New experimental recipes are constantly coming out, and if they prove successful, it leads to a following. In fact, there’s even an app for your phone called Untapped—a social media platform for beer connoisseurs and enthusiasts. Not only can you explore local surrounding bars and beer marts, but you can also track when various craft beers will arrive at your favorite place of business. Because it is a social media platform, the app includes a rating system, pictures to share with other users, and has an algorithm for new recommendations. Did I mention the industry is still growing?

Summer is a profitable time for breweries. The best beers are in high demand as early as April with mixtures of classic pilsners, citrus blends, pale ales (India and New England), sour beers, and Saisons. The list goes on and on. You’ll have no problem choosing at least one favorite. Beyond Fourth of July barbeques and baseball games, it’s a chance for music festivals, renaissance fairs, and beer gardens to gain recognition—especially beer gardens.

Now, I know what some of you might be thinking: what exactly is a beer garden? Simply put, it’s a designated outdoor area where beer and food are served with shared tables. If you’re familiar with Oktoberfest in Munich, Germany you’ll know exactly what I mean—just another outstanding tradition brought to America from across the pond.

With West Chester in mind, who has a local beer garden worth checking out? Look no further than Levante Brewing Company, located in the heart of Chester County on Carter Drive, and their larger location, The Stables, in Chester Springs. When their doors opened for business in 2015, they wanted to give Pennsylvanians a harnessed mixture of contemporary blends that infused New World hops from Italy into American IPAs. They’ve done an excellent job since then at expanding upon a simple principle into the creation of an impressive menu. Trevor Martin, the general manager of Levante, has outdone himself.

I had the chance to visit the location on Carter Drive. While the garden may look small on the outside, once the main garage door opens on a warm summer evening the outside flows into the interior. This place checks off all the boxes a great beer garden needs: barrel tables, lights, laughter, and outdoor service. Cloudy and Cumbersome, a New England style pale ale, was my favorite sample and the most popular. Tickle Parts came in at a close second, but that’s not all. “They’ve got a great selection here!” says Matthew Gilberg, a patron of Levante. “The one to look out for would be Purple Pine Drops, a session IPA that tastes like a summer ale. It should be available in June.”

Not only is Levante’s beer garden a great social gathering hotspot, but it also has live music on Friday nights. Will Gardner has been playing guitar at the Carter Drive location from 6-9 pm every Friday under his solo act The Unit since 2021. “When Covid started to slow down, I offered to play, and I’ve been doing it ever since. It’s a lot more fun playing outside in the beer garden with the garage door open. But The Stables is where it’s at. That’s a real beer garden. They have the space and the size. I would highly recommend it.”

Will also performs at Levante Stables on Sundays with his full band, Willie and the G’s. They perform covers of all the iconic rock songs, and I would highly recommend checking them out if you’re in the mood for good tunes to go along with a good brew.

While Levante’s beer gardens might sound livelier and more upbeat, some may prefer another alternative—one that is more on the mellow side but still offers some pizazz and energy. It’s always great to have options. The Social on Gay Street might just be what you’re looking for, right in the heart of downtown West Chester. Ever since they moved in 2016, the expansion of the facility continues to impress. Every square inch of this location oozes a top-shelf atmosphere, and the beer garden almost resembles an actual garden with full bar service. “One thing I love about our beer garden is its chill vibe,” says Gunnar Funk, an employee of The Social for over five years. “While we tend to use it more towards social events and parties, it’s a very intimate space. No traffic noise or commotion from the street. Our most popular drinks to serve in the garden are our blueberry mojito and our 19-ounce shakers, which come in a wide variety of blends.”

Then there’s Greystone Oyster Bar on Church Street. They represent one of the newer beer gardens in town, as it was introduced on March 22, 2021. “One thing that separates our beer garden from others is that we brew our own beer on site,” says Chris Jones, general manager of Greystone. “Despite our previous six feet distancing regulations, we’re still rockin’ and rollin’!” They’re “rollin’’ out some new décor, too. “Something we’re excited about introducing this year are our canvas sails for the patio tables rather than umbrellas. We’re going for a new look to attract new customers, right in time for our Greystone Pilsner and Golden Ale, our most popular blends.” So, a 5pm happy hour, $2 oysters, and an endless menu? Sounds like a great night out right here in the borough.

It doesn’t end there. Highland Orchards on Thorndale Road established their own Spring Fling Beer Garden in 2018 alongside their long running farmers market and bakery. A hard cider at an orchard? Absolutely! You can’t argue with that option on the menu. “We’re very family oriented, which separates us from other beer gardens,” says Orchard co-owner Alan Hodge. There are some familiar faces here, like Levante Brewery, Neshaminy Creek Brewing, Big Hill Ciderworks, and many more. Highland Orchards officially opened their beer garden this year on May 28 and sticks around, excluding Mondays, until October 30. You’ll just need to swap out your shorts and tees for jeans and sweaters to carry that outdoor socializing right into the fall months.

While we try to move past the last two years, businesses continue to tough it out while introducing new ideas for a brighter tomorrow. Beer gardens have a lot to offer when the weather is gorgeous and the lights are low. It’s a feeling of normalcy at these spots even if you’re just looking to have a social drink with friends. Raising a glass outside with those you love in groups large or small is what visiting a beer garden is all about. 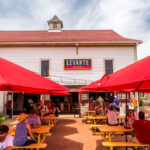