It’s not a circus without a great ringleader. It’s not a party without a great host. It’s not a night at the club without the right DJ. And it’s just not the annual West Chester Christmas Parade, back from a two-year hiatus—without perennial co-host and emcee, Adam Joseph. You may know him from television, where’s he’s been meteorologist at 6ABC for 17 years. You may know him for his Martha Stewart-like Instagram account (except more handsome), full of home décor, gardening tips, next-level baked goods, and beautiful family. Karl, Hannah, and Jacob know him as husband and father.

We sat down with him for a quick Q&A, and we started off…well, talking about the weather. And yes—he’s as delightful as you think he is.

WCP: I heard a meteorologist on the radio this morning, describing this chilly, rainy day as “awful, terrible” weather. If it was hot and sunny every day, I’d lose my mind. What do you think?

AJ: SAME! No, thank you. Boring. That’s why I live here. I’m a New England boy, so I’m all about the Mid-Atlantic northeast and the four seasons. I’m ready for the next as soon as the current one ends.

WCP: Did one specific event point you towards a career in weather?

AJ: No. My mother will tell you “He was born to do the weather.” [He said this in her Boston accent, which was perfection.] I was born during a massive flood—she almost didn’t make it to the hospital, but from as early as I can remember, I was obsessed with weather. I didn’t watch cartoons; I watched the Weather Channel. I was in a weather club; I went to stations to meet different meteorologists. It was in me, from Day One.

WCP: Super-trite question but I must ask: what’s your favorite season?

AJ: Hands down, fall. Fall, fall, fall. It’s refreshing and cool, it’s so great putting on that first sweatshirt after a long, hot summer—the sights, smells, and tastes. It’s sensory overload. I love every aspect of it. Also, my birthday’s in the fall, so maybe that’s part of it…?

WCP: Yes—I see you’re a Scorpio. They are notoriously private. How does that line up with such a public life?

AJ: I was just talking with someone at a party about this! I said, “I really don’t like these gatherings.” And he was like “What do you mean – you’re on TV!” That’s the thing. If you look at actors and other people on TV, they seem reserved and quieter in person. And the thought is oh, they’re stuck up or snobby, and it’s not really the case. It’s more that you’re “on” all the time, and then when you’re “off” – just like with any job, you’re off. Being on 24/7 is a lot. I signed up for this and I love it and wouldn’t be in it if I didn’t, but honestly, I’m more of an introvert than an extrovert. And Scorpios are pretty Type A, which I definitely am. But given the choice, if I’m in a room, I’d rather be in a corner observing than in charge of entertaining everyone else. So, what do I do? I’m the emcee of the West Chester Christmas Parade! I’ve learned I can do both.

WCP: On your Instagram account I saw a pie you baked that made me weak in the knees. I’m not a terribly domestic person; is that…relaxing for you?

AJ: Absolutely! Put me in a kitchen, every time. We love entertaining close friends and family—it’s less overwhelming than those larger venue things, which can feel like work. But both Karl and I love entertaining in our own home. We love feeding people, making cocktails, smaller parties. His family is huge, and at Christmas, I’ve made dinner for 25 people. They always ask what they should bring, and I always say, “I don’t want anything, I just want you to come in, have a good time, and leave me in my kitchen.” And I do the whole thing—entrée, sides, dessert. I’m a true foodie when it comes to cooking, but baking is really my forte.

WCP: You also seem to be quite the gardener.

AJ: Yes. After a stressful day, it’s nice to come home, go to the garden and see the fruits of your labor or pick some fresh flowers to put in a vase. I’m mostly a country boy, I’m domestic, give me land. My nana and pop-pop taught me about gardening and how to grow food, and that’s what I’m teaching my own kids.

WCP: Let’s talk about your kids. Between you and Karl, who’s the good cop and who’s the bad cop in terms of parenting styles?

AJ: [laughs VERY hard] Umm, I would say that I’m the pushover for sure. Karl makes a decision, and the wall is up. The kids can find a crack in my wall and get through it. I’ve tried to learn to be a little stricter, more of a parent than a friend. Either way, I think they figure out how to work each of you!

WCP: What has parenting taught you?

AJ: To have more patience, not just with them but in life. And to enjoy the everyday, to see things through their eyes. It takes you back to when you were little, the excitement of all the “firsts.” It reminds you that life is precious, and you need to really absorb all of it. And it’s truly the little things in life that mean the most.

WCP: Do you have a favorite Christmas movie?

AJ: [chuckling] Well, I don’t know if this really qualifies but I have to say National Lampoon’s Christmas Vacation. I absolutely love it because he’s very much like me with all the lights outside and just trying to make everything the best it can be for his family. I really relate.

WCP: What about a favorite Christmas song or carol?

AJ: Oh, I love them all, but I’d have to say “The Little Drummer Boy”—it was my nana’s favorite. I always remember her loving that song, so that’s the one.

WCP: Is there a food you only make or eat at Christmastime?

AJ: Sugar cookies. Obviously, you can make and eat them all year round, but I only do it at Christmas, from scratch, with the kids, with the sprinkles and everything. But if I were to say what people want from me, it would be the ooey-gooey butter layer cake I make. It’s very dense, made with sour cream and an orange custard in the middle and a cream cheese frosting on top. [Editor blacked out for a second here.]

AJ: The small, hometown feel. The restaurant scene, the ambiance of the town, I’ve always loved it. We take the kids to Highland Orchards every fall, but then again, we went before them, too! It’s always a treat. Oh, and I have to mention my favorite restaurant in West Chester. It’s Dolce Zola. It’s a family who moved here from Italy and realized that there were no from-scratch pasta places, so they first created I-Pasta. Now they’ve bought the place next door and expanded, and we love it there. We always go when we’re in the borough. Phenomenal.

WCP: Do you have any comment about the recent Outfest kerfuffle? I’m guessing you heard about it.

AJ: I did! Karl sent me an article link, like “How depressing is this?” that it was canceled due to people writing in complaining about it. But then people stepped in and did it anyway, which they should! As someone who is in this industry, you’re always going to have people who disagree with you. Everyone has a voice and I welcome that and what they think or feel. But when you go to the level of—I don’t want to say “attacking” because I don’t know what the complaints were—it’s wrong. When something is just trying to be inclusive and welcoming of any lifestyle, that’s a positive—that’s being there for everyone in your community. Look, you’re gonna get hate mail—I get hate mail every now and then myself. But it’s always someone with no profile picture, or no return address. So, I ignore those and tell myself “That’s just an unhappy person and I feel bad for them.” I want to respond, but I can’t if they don’t let me. I’m really happy to hear that it went forward in some way. There are LGBTQ kids and even of my generation who are still struggling, and to hear something negative like this could cause them to hesitate to be who they are. These folks are just out there trying to live their lives and spread awareness. I commend those people [who made it happen], I really do.

WCP: And finally: the parade!

AJ: I’m very excited that the parade is back! I’m excited to work with a new co-host [incoming Chamber President Christy Cosgrove] and to see what businesses are participating and just…all of it. This parade means a lot to me. I went when I was single. When I met Karl, I started bringing him to it. Now we bring our kids to it. So even though the 6ABC Thanksgiving Day Parade technically kicks off this season, honestly, the West Chester Christmas Parade signifies the start of my holiday season with my kids. It means so much. 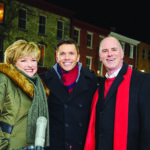